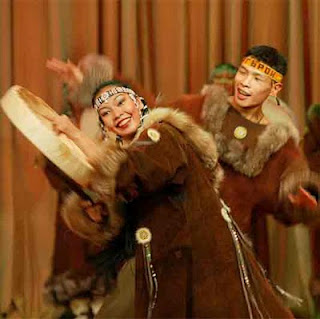 Чукотско-эскимосский ансамбль песни и танца «Эргырон» (Chukchi-Eskimo song and dance ensemble "Ergyron") is the first and biggest music ensemble representing the Chukchi, an Arctic people living in the most extreme northeastern part of Russia. Ergyron ("dawn"/"sunrise" in the Chukchi language) was founded in 1968 by the government and gave its first concert in 1969. It has toured around Russia, the former Soviet Union, and the rest of the world.

Most of its songs and dances are the traditional music of the Far North, not only of the Chukchi, but also the Eskimos, the Koryaks, the Itelmen, the Aleuts, the Yupiks, the Alutors, the Lamuts, the Chuvans, the Evens, and the Evenks. In recent years, Ergyron has sung about contemporary Chukchi life. It is based out of Anadyr, the capital of Chukotka, but at any time during the year may be on tour somewhere in the world, performing the songs and dances of the Far North....

, which is entirely in Russian, and gives a detailed history of the ensemble, biographies of its members, and a list of scheduled performances.

Over the years, Ergyron has changed members, though there are usually somewhere under twenty. Here are some of them.