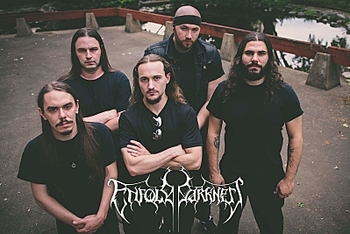 Enfold Darkness is an American blackened death metal band. While they have never been a particularly big act and have picked up something of a reputation for their troubled history, they have nonetheless managed to become a well-liked act that is renowned for their tenacity and resolve in spite of their numerous trials and tribulations.

Formed in Nashville, Tennessee at some point between 2005 and 2006 by Josh del Sesto (vocals), Matt Brown, Mike Low (guitars), Eviean DuReaux (bass), and Josh Brown (drums), the band quickly built up a local reputation. Once it came time to record some material, however, it became clear that del Sesto and DuReaux were not where the band needed them to be, and so they were let go of and Justin Corser and James Turk were called in to replace them, while Jack Blackburn replaced Josh Brown on drums within that general timeframe as well. The ensuring Before the Final Reckoning demo quickly picked up steam regionally and, more importantly, online, and after catching the eye of Michael Keene when they opened for The Faceless at some point in 2007 or 2008, they were signed to Sumerian Records, while Mike Low joined in on guitar at some point during this stretch of time. Our Cursed Rapture, their debut full-length, was released in late 2009 right as they started touring nationally, though Mike Low left sometime before its release and had his spot filled by Turk once again, while AJ Lewandowski came back as a live member for the early runs. The other lead guitar spot was taken by Malcolm Pugh at some point in 2010, and the touring continued for the rest of 2010 and 2011; by the end of 2011, Malcolm Pugh was out, and in his place came the local young gun Elijah Whitehead. "Lairs of the Ascended Masters", their first new track in almost three years, emerged in early 2012, while Blackburn left shortly after to join Vital Remains and Corser himself ducked out not long after, and the band as a whole parted ways with Sumerian Records. The band enlisted Chason Westmoreland to handle live commitments for the rest of the year, while Adrian Perez (Warforged) joined on what was supposed to be a full-time live basis before bailing himself, which repeated itself when Josh Brown came and went again between 2012 and 2013. The drummer woes were solved when Greg Vance joined in 2013, while Matt Brown eventually gave up the guitar spot to do vocals in 2014. A more dedicated bassist was found in 2015, when Todd Honeycutt stepped up, and the band signed to Malcolm Pugh's label The Artisan Era and released "The Dirge of the Surrogate Invictus", a new single. The band then prepared to embark on a West Coast tour that fall, but that then fell through after Greg Vance's then-girlfriend was in a car accident several days before the start of the tour. 2016 then brought another hurdle, as Matt Brown converted to Islam and left the band, and after a semi-prolonged search for a vocalist, they snagged Andy Nelson. 2017 brought a proper return to the recording studio, and Adversary Omnipotent, their first full-length in almost eight years, was released that July to glowing reviews. It appeared as if the band had finally caught a break.

That all changed on August 31, 2017, when Todd Honeycutt committed suicide several days after leaving the band. The band once again fell into inactivity as Whitehead fell into a deep depression, and they spent virtually all of 2018 with no activity save for one live show. Around the beginning of 2019, they reemerged somewhat, as Whitehead announced that a new album was in the works, and they slowly began to play shows again. While the rest of the details are hazy, they are back, and will likely begin to steadily increase their activity level as the year goes on.