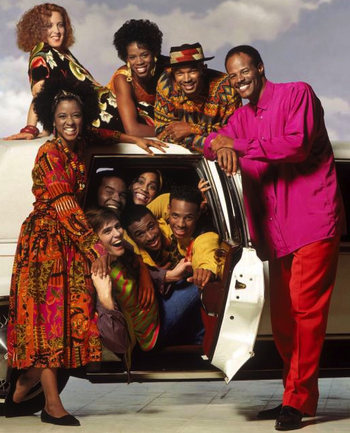 In Living Color! Wrote an article 'bout it! Like to read it? Here it goes!

A half-hour sketch comedy show that aired on Fox from 1990 to 1994, created by Keenen Ivory Wayans and starring several of his brothers (Damon, Shawn, and Marlon) and one sister (Kim). The series is largely known as the launching pad for the careers of The Wayans Family, Jim Carrey, Jamie Foxx, David Alan Grier, and Tommy Davidson — as well as Jennifer Lopez and Carrie Ann Inaba, who were part of the show's "Fly Girl" dance troupe.

It was effectively Saturday Night Live for the black and Hispanic set (SNL didn't have a lot of black cast members at the timenote Back in the 1990s, they had Chris Rock [who left because of creative differences], Tim Meadows [who didn't become popular until later in the decade], and Ellen Cleghorne [who was lost in the shuffle of white, male cast members but is considered the first black female repertory player who lasted more than one season]. Compare to Seasons 40-41, when they had five black cast members — Kenan Thompson, Jay Pharoah, Michael Che, Sasheer Zamata, and Leslie Jones — the most in one cast. and wouldn't get a Hispanic cast member until Horatio Sanz was hired in 1998note Since then, SNL has had three other Hispanic cast members besides Sanz: Fred Armisen, the longest-running Hispanic cast member [2002-2013], Noël Wells, the first Hispanic female cast member, first to be Mexican, and the shortest-lived Hispanic cast member [was only on the show for the 39th season — 2013-2014] and Melissa Villaseñor), featuring R&B and hip-hop musical acts.

Memorable recurring characters include the ex-con clown Homey D. Clown (Damon Wayans), the flamboyantly gay film critics for the "Men On..." seriesnote it started out as "Men On Film," but expanded to other topics from vacation to football to books (Damon Wayans as Blaine Edwards and Grier as Antoine Merriweather), abhorrent and Mirror-Cracking Ugly admirer Wanda (Foxx), mannish bodybuilder Vera DeMilo (Carrey), and the cartoonishly destructive safety officer Fire Marshall Bill Burns (Carrey).

Unfortunately, the edgy comedy of the series — not only its raunchiness but sometimes cutting racial satire — eventually brought down the wrath of network executives who regarded it as Too Hot for TV, and the Wayans family ended up leaving the series over the course of the fourth season. Season Five still had Carrey, Grier, Foxx and Davidson, but the quality suffered for the absence of many of the recurring characters (not only those the Wayans played but Carrey's, as he was making fewer appearances) while five new cast membersnote Jay Leggett, Reggie McFadden, Carol Rosenthal, Marc Wilmore, and Anne-Marie Johnson. Despite his appearances in some episodes, Chris Rock was never a cast member during In Living Color's final season. He was like Steve Martin on SNL in that he appeared a lot as a guest star didn't connect with audiences. The show ultimately was cancelled, freeing the breakout stars to go on to varying degrees of success in film, TV, and stand-up comedy. It was scheduled to be revived with a new cast in 2012, but due to negative reception from focus groups and executives over the new pilot the project was shelved.

The show has been on and off television in reruns. It's aired in reruns on FX, BET, Centric, and FXX, and currently splits time between Aspire and TV One. All five seasons are on DVD, but most episodes are edited to remove any and all traces of licensed songs, such as characters Waxing Lyrical, characters singing the actual song, popular 1990s songs playing during the Fly Girls interstitials, and the music video parodies. If you want to see the show as it was back in the 1990s, your best bets are reruns or YouTubenote if you happen upon an uncut version, as most of them are the edited DVD cuts.

The show is also notable for being the reason the National Football League books a high profile musical act for the Super Bowl halftime show. During Super Bowl XXVI on CBS in 1992, Fox decided to broadcast a special live episode of In Living Color! at halftime so viewers would have something to watch other than the then-bland halftime shows consisting of marching bands and pageants. The stunt worked and the episode drew in 22 million viewers while also causing the second half of the Super Bowl to lose 10 Nielsen ratings points. Thus, the NFL began booking music stars to perform, starting with Michael Jackson the next year, to keep as many viewers glued to the game as possible.

Not to be confused with the funk-metal band Living Colour or a BBC radio comedy sketch show of a similar name.

Now has a Character page that could use some wiki love.

This show contained examples of the following:

AAAAAAAAAH HAAAAAAAAA! Thank you very much!

One of the contestants on the "Miss Black Person USA" held a ten-second note while singing a song for her talent portion (and won).

One of the contestants on the "Miss Black Person USA" held a ten-second note while singing a song for her talent portion (and won).