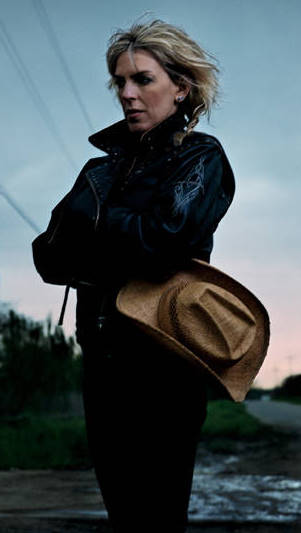 "Just when you think thought there were no more truths to be unearthed in the human heart, along comes Lucinda Williams, who plows up a whole new field."
Emmylou Harris

Lucinda Williams is a critically acclaimed Grammy Award-winning singer-songwriter best known for her earnest, powerful lyrics and distinctive Vegemite voice. She is likely the most popular alt-country performer today, with the possible exception of Ryan Adams. Her music incorporates elements of a variety of styles, including traditional country, blues, and heartland rock.

Born on January 26, 1953 to poet Miller Williams, Lucinda is of no relation to the Hank Williams country dynasty. Williams began writing at 6, was playing guitar by 12, and played her first live show at 17. She released her first album, Ramblin', in 1979; it was composed entirely of covers and barely made an impact either critically or commercially. Two years later, a wholly Lucinda-penned follow-up called Happy Woman Blues garnered slightly more attention and considerably more praise.

After spending eight years building a larger following, Williams released a self-titled third album in 1988. The album was her most popular work yet and attracted attention from artists such as Tom Petty and Emmylou Harris. Her growing popularity made 1992's Sweet Old World hit the Billboard Heatseekers chart, and she finally gained considerable mainstream attention by winning the 1994 Best Country Song Grammy Award for Mary Chapin Carpenter's poppified cover of "Passionate Kisses." Her complete breakthrough arrived in 1998; six years of meticulous work resulted in the album Car Wheels on a Gravel Road, which received massive critical acclaim and became her first gold-certified album, thanks in no small part to the single "Still I Long for Your Kiss" from the soundtrack to The Horse Whisperer.

After Car Wheels, Williams released Essence and World Without Tears in 2001 and 2003, respectively. Both were considerably more downbeat than Car Wheels and neither replicated its commercial success, but the majority of critics still highly praised her work, and the Essence track "Get Right with God" earned her another Grammy win, this time for Best Female Rock Performance. A two-disk live album, Live @ the Fillmore, arrived in 2005. She went through a difficult breakup, lost her mother, and moved to Los Angeles; all of these were perfect ingredients for Creator Breakdown, as reflected in 2007's West. Her 2008 album Little Honey, described by Lucinda on one occasion as West Part 2, featured a duet with Elvis Costello called "Jailhouse Tears"; they continued their partnership on 2011's Blessed, on which Costello played lead guitar. The two also recorded a Grammy-nominated duet version of the Blessed song "Kiss Like Your Kiss" specifically for True Blood, which has featured her music multiple times.

Studio discography as of 2020: