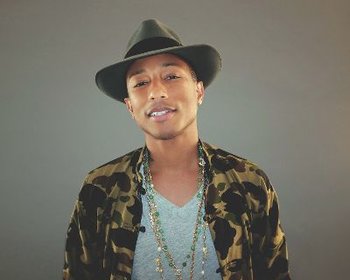 Pharrell Lanscilo Williams (born April 5, 1973) is an American singer-songwriter and producer. He has produced, co-produced, and remixed many songs and albums for various artists, including (but definitely not limited to) Maroon 5, Beyoncé, Ariana Grande, and Snoop Dogg.

In addition to his production work, he is also the lead singer of the Funk Rock band N*E*R*D, and one half of the production duo The Neptunes (consisting of him and Chad Hugo). He has also served as composer for a number of films.