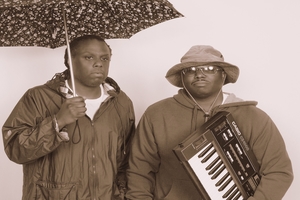 A musical band, Wedlock formed circa 2004 in Richmond, VA, formed of Paul Allgood (vox, sampling) and Jeff Hathaway (programming, keyboards) for its original members. They did a couple Eps together until Jeff formed his own production company and Paul kept going with Wedlock in live form. Exogamy was a 2008 debut that eventually reached #40 on Out Voice's LGBT chart, and also contained their most successful single to date "Black Sundress"(#9 Amazon mp3). Their follow up, Continuity, was voted runner-up in the Indie Band of the Year Contest hosted by Music Emissionsnote A Canadian E-Zine.

Allgood has been the sole remaining original member, and continues to record and perform as Wedlock with many others, much like Pere Ubu but not nearly as famous.

Wedlock has examples of the following tropes: