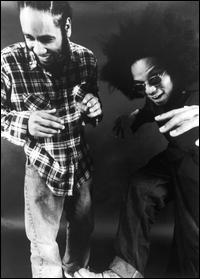 New Kingdom was a Alternative Hip Hop group formed in 1987 by a couple of music geeks from New York, Sebastian, a former Hardcore Punker, and Nosaj, a devotee of Soul artists like Curtis Mayfield. Despite only making two albums, this underappreciated band is the missing link between Psychedelic Rock and Hip-Hop, and are considered by their fans to be pioneers in a trippy, acidy psychedelic fusion of rap and rock that has oozed over into other genres and artists in the Underground Hip Hop scene.

New Kingdom is known for their bizarre, freeform-sounding lyrics which are often Mind Screwy or slurred as fuck, and a sound that, as explained above, mixes Funk, Soul, Rap, Rock and Psychedelia, sounding like a early Funkadelic crossed with Bitches Brew-era Miles Davis, The Fabulous Furry Freak Brothers and a rapper doing an imitation of Captain Beefheart. The vocals are not so much rapping as it is shouting spoken poetry over Psychedelic Fusion.

They dropped off the face of the Earth after only two albums: Heavy Load and Paradise Don't Come Cheap.

Not to be confused with the Alternative Rock band of the same name.