Music / Pop Will Eat Itself 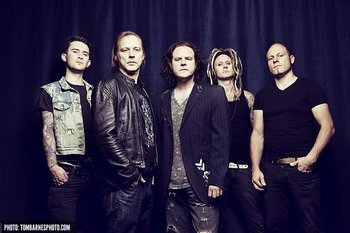 If they come to ethnically cleanse me?
Will you speak out? Will you defend me?
Freedom of expression doesn't make it alright!
Trampled underfoot by the rise of the right!
— "Ich Bin Ein Auslander"
Advertisement:

Pop Will Eat Itself (PWEI or The Poppies for short) were an Alternative Rock/Alternative Dance/Industrial Rock band from Stourbridge in the West Midlands, active initially from 1986 to 1996. Their sampletastic, hip-hop and electronica-influenced alternative rock style was nicknamed "Grebo" in music magazines like NME and Melody Maker, largely from their songs "Oh Grebo I Think I Love You" (from Now for a Feast!) and "Grebo Guru" (from Box Frenzy). They're nowadays rather more famous for being the band Clint Mansell started his career in than their actual music.

The band was first formed in 1981 under the name From Eden, with its members being Clint Mansell, Adam Mole, Chris Fradgley, Malcolm Treece and Miles Hunt, the latter two later becoming famous in their own right in The Wonder Stuff. After Fradgley, Treece and Hunt left, Mansell and Mole brought in Graham Crabb and Richard March as their replacements, and changed their name in 1986, at first to "Wild and Wandering", and then finally setting on "Pop Will Eat Itself", a name they cribbed from an NME article.

With Clint Mansell on guitars and vocals, Adam Mole on guitars and keyboards, Richard March on bass and Graham Crabb on drums, PWEI initially recorded a series of short, hooky Pop Punk singles (which were later collected on the compilation Now for a Feast!), which saw little success despite "Poppies Say Grrr!" being declared "Single of the Week" by NME. Their debut album Box Frenzy saw them move away from their purely Pop Punk sound (while keeping their humorous lyrics), and begin to incorporate drum machines, Sampling and influences from genres like New Wave Music, Hip-Hop, and House. One of the singles from this album, "There's No Love Between Us Anymore", marked their first appearance on the UK singles chart, at #66.

Three important things happened in the process of PWEI recording their follow-up album: Graham Crabb abandoned the drums in favour of vocals and other instruments, being replaced with a drum machine nicknamed "Dr. Nightmare", the band signed a record contract with RCA Records, and they hooked up with Alternative Rock Record Producer Mark "Flood" Ellis. This Is The Day... This Is The Hour... This Is This!, released in 1989, saw the band develop its sound further with increased Hip-Hop influences, kaleidoscopic sampling, metal-flavoured Epic Riffing and more electronic elements, all sharpened by Flood's production, over which Mansell and Crabb barked, Piss Take Rapped and sang their amusingly silly lyrics like an English Beastie Boys. Being synchronised with a stream of nationally popular bands that either combined rock with dance music (The Stone Roses and Happy Mondays) or bands that had a similar everything-goes, danceable alt-rock sound as the Poppies (Jesus Jones, Carter the Unstoppable Sex Machine, their Stourbridge comrades The Wonder Stuff, Ned's Atomic Dustbin and Diamond Head), This Is The Day... was greeted with great reviews, went to #24 on the British charts and spawned three successful singles: "Def. Con. One" (a hit on the US Modern Rock charts), "Can U Dig It?" and "Wise Up! Sucker..." (which featured backing vocals from their former bandmate Miles Hunt). Next year's follow-up album, Cure for Sanity, largely continued in the same style and with Flood behind the mixing boards again, and was similarly well-received.

For their next album, PWEI brought in drummer Robert "Fuzz" Townshend to complement their drum machine rhythms and loops, and moved into a slightly more Darker and Edgier style with more noticeable Grunge and Industrial Metal influences. The Looks or the Lifestyle? saw the band do even better commercially than before, spawning their highest-charting single "Get the Girl! Kill the Baddies!", but the band ran into trouble with Executive Meddling, as their greatest supporters in RCA had left the company and the remaining executives didn't understand them or their style. As a result, they were dropped from the label before "Get the Girl! Kill the Baddies!" was released in 1993. They then moved to Infectious Records, a label started by Korda Marshell, their friend who had signed them to RCA but had since left the label. Their next album Dos Dedos Mis Amigos was even more Industrial Metal than before, with its lead single "Ich Bin Ein Auslander" being a politicised Protest Song against attitudes towards immigration and the popularity of the far-right in the UK, with a Surreal Music Video parodying the industrial scene where March and Mole played comically oversized guitars. Amigos was the band's best-selling album in the UK at the time (peaking at #11 on the charts), and a joint tour with Nine Inch Nails increased their popularity and led them to sign a contract with Nothing Records for US distribution. Around the time of the remix album Two Fingers My Friends! was released, Crabb left the band, leaving Mansell as sole vocalist, and was replaced with Kerry "The Buzzard" Hammond. The band began recording a new album with Trent Reznor as the producer and collaborated with The Prodigy for "Their Law", but disbanded before they could finish recording. Crabb then pursued his ambient side project Golden Claw Musics, March and Townshend formed the big beat band Bentley Rhythm Ace, and Mansell moved onto his new career of scoring every single Darren Aronofsky film ever made.

PWEI briefly reunited to play live concerts in 2005-2006, though attempts to record new material failed due to Mansell and March's previous commitments. The band was finally revived in 2010 with an entirely new lineup in which Crabb was the only original member, with Mary Byker (formerly of Gaye Bykers on Acid), Tim Muddiman, Davey Bennett and Jason Bowld as the new members. This lineup released a new album, New Noise Designed By a Sadist, in 2011.

Tropes demonstrated by Pop Will Eat Itself: