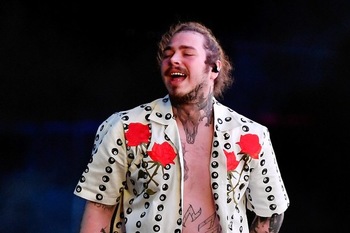 He feels like a rockstar.
Influences: Bob Dylan, Kurt Cobain, Johnny Cash, 50 Cent, Kanye West, Key!
Austin Richard Post (born July 4, 1995), better known as Post Malone, is an American rapper. Best known for being one of the most notable trap musicians, as well being a Fountain of Memes, as well for his laid back, goofy personality.
Advertisement:

Releasing his first album Stoney in 2016. The album peaked at Number Four, and spawned the hits "White Iverson" and "Congratulations". His second album beerbongs & bentleys topped the charts in several countries and included the number 1 charting single "Psycho".