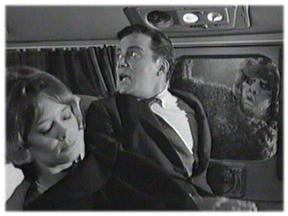 "Uh...stewardess?"
Rod Serling: Portrait of a frightened man: Mr. Robert Wilson, thirty-seven, husband, father and salesman on sick leave. Mr. Wilson has just been discharged from a sanitarium where he spent the last six months recovering from a nervous breakdown, the onset of which took place on an evening not dissimilar to this one, on an airliner very much like the one in which Mr. Wilson is about to be flown home — the difference being that, on that evening half a year ago, Mr. Wilson's flight was terminated by the onslaught of his mental breakdown. Tonight, he's traveling all the way to his appointed destination, which, contrary to Mr. Wilson's plan, happens to be in the darkest corner of the Twilight Zone.
Advertisement:

Bob Wilson (played by William Shatner) is a salesman on an airplane with his wife for the first time since his nervous breakdown six months prior. As he stares out his window on a a stormy night, he thinks he spots a supposed gremlin on the wing of the plane. But, every time someone else looks out the window, the gremlin always leaps out of view, so nobody believes Bob's seemingly outlandish claim. Bob realizes that his wife is starting to think he needs to go back to the sanitarium, but after he sees the gremlin begin to peel back the metal on the wing he realizes that if nothing is done about the gremlin, it will cause the plane to crash. The flight attendant tries to give Bob sleeping pills, but Bob fakes swallowing them so he can stay up and do something about the gremlin. Bob then steals a sleeping policeman's revolver, and opens the window marked "Auxiliary Exit" to shoot the gremlin, succeeding despite the fact that he is nearly blown out of the plane himself. Once the plane has landed, although he is whisked away in a straitjacket, a final shot reveals evidence of his claims: the unusual damage to the plane's engine nacelle, yet to be discovered by mechanics.

Rod Serling: The flight of Mr. Robert Wilson has ended now, a flight not only from point A to point B, but also from the fear of recurring mental breakdown. Mr. Wilson has that fear no longer... though, for the moment, he is, as he has said, alone in this assurance. Happily, his conviction will not remain isolated too much longer — for happily, tangible manifestation is very often left as evidence of trespass, even from so intangible a quarter as the Twilight Zone.