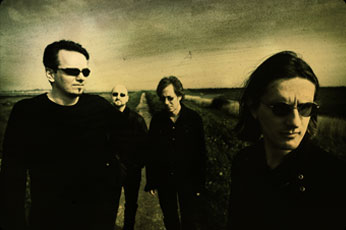 Porcupine Tree is an English Progressive Rock group formed by Steven Wilson. They are known to combine elements of rock, Ambient, Psychedelic Rock, Krautrock, electronica and (since In Absentia) Heavy Metal into their music. Many critics have hailed them as the modern-day Pink Floyd when their popularity increased in The '90s, but Steven Wilson has expressed his dissatisfaction with this label, preferring that Porcupine Tree be known as "the old Porcupine Tree" or "the new Porcupine Tree" (as opposed to the "new" somebody else).

Porcupine Tree started in 1987 as a psychedelic/space rock band with only Steven Wilson, who was signed to Delerium Records after a period of distributing his own cassettes and passing off PT as an old forgotten Fake Band, like Spinal Tap. On Delerium, Wilson released two and a half albums largely recorded by himself with overdubbing and drum machines (some songs on The Sky Moves Sideways were performed by all the band members) before turning PT into an actual band. Their fourth album, Signify, was their first album where all the band members played. Their next album, Stupid Dream, slightly withdrew from the spacy, psychedelic, Epic Rocking material on their earlier albums, adding elements of Alternative Rock and accentuating their Progressive Rock influences. Starting with In Absentia, their albums have started getting heavier and veering into progressive metal territory, although not to the extent of such bands as Opeth or Dream Theater.

Porcupine Tree went on hiatus in 2010 following Steven Wilson's interest in continuing his solo career; in 2018 Wilson declared Porcupine Tree "finished", but eventually announced a reformation in 2021 as a trio, with a new album titled Closure/Continuation released in June 2022.

Steven Wilson is known to be close friends with Mikael Åkerfeldt; the two have collaborated with each other's bands: Wilson sang backing vocals on and produced four Opeth albums (Blackwater Park, Deliverance, Damnation, and Heritage) while Åkerfeldt contributed backing vocals to three songs on Deadwing and a guitar solo to "Arriving Somewhere But Not Here". The two have even collaborated on a project entitled 'Storm Corrosion'.

Plus the predictable bunch of EPs, compilations, rarities and live albums

Only apathy, from the tropes in me, it's all in me, all in you: