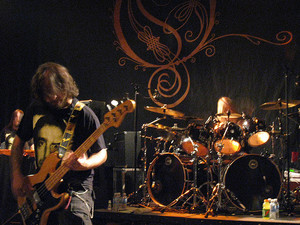 The dudes themselves. Opeth logo visible in the background.
Influenced by:
"If one cut the source of the flow
And everything would change
Would conviction fall
In the shadows of the righteous?
The phantasm of your mind
Might be calling you to go
Defying the forgotten morals
Where the victim is the prey"
— "Ghost of Perdition"
Advertisement:

Opeth is a Progressive Death Metal band formed in Stockholm, Sweden, by David Isberg and Mikael Åkerfeldt. After the band was formed, David later quit and left the band; Mikael became the main vocalist and guitarist.

In 1995, Opeth released their debut album Orchid, which was critically praised for its unique style of death metal, having twin guitar harmonies, also adding acoustic guitar, piano, and clean vocals, something rather unusual for the Scandinavian death metal scene at the time. A couple of years later, they released Morningrise, which continued to explore the techniques used in Orchid. While it was quite popular, Opeth noticed that other metal bands began to copy them and Mikael urged the band to change their signature style. This lead to the release of the dark Concept Album My Arms, Your Hearse. A couple of years later, they released the fan favorite Still Life, in which they began to deconstruct their sound. However, they never went on tour because their music, while well liked, was not mainstream.

This all changed with the release of Blackwater Park, which many fans and critics considered then to be Opeth's best. After the massive success of Blackwater Park, they began their first world-wide tour. Within a six month period of time, they released two albums: Deliverance and Damnation. The former is considered to be the band's heaviest work while the latter is a more elegant acoustic based album. While Deliverance was well-received, Damnation instantly became a fan favorite, most notably the song Windowpane. (Note that Opeth originally planned these two to be a Distinct Double Album, but Executive Meddling nixed the idea). After extensive touring, they released 2005's dark and majestic Ghost Reveries, which (just like other previous albums) became an instant hit. After the release of Ghost Reveries however, Peter Lindgren and Martin Lopez (guitarist and drummer, respectively) left the band, leaving Opeth's future in doubt. Nevertheless, in 2008, Opeth released Watershed, which has been praised as their deepest and most mature work to date.

Starting with 2011's Heritage, Opeth underwent a Genre Shift to Progressive Rock, with which they had already experimented on Damnation. This continued on 2014's Pale Communion, and the band members appear to have no interest in returning to their metal style. The shift has predictably met with mixed reaction from existing fans, though it has won them some new fans as well.

Despite their departure from the genre, Opeth are generally accepted to be one of the poster children for Progressive Death Metal. While they are firmly rooted in Scandinavian death metal, they have shown many elements of Progressive Rock throughout their albums. They are known to combine elements of heavy metal, progressive rock, Scandinavian folk music, blues, jazz, and acoustics into their songs. While Mikael has stated that groups that inspired Opeth were ones like Slayer, Black Sabbath, Death, and Celtic Frost, he fully admits that other bands like Yes, Camel, Magma, and other progressive bands inspired the progressive rock side of them. They are well known to try something new even after an extremely successful album (à la Blackwater Park and Ghost Reveries). They remain one of the world's most popular Death Metal acts, and are considered to be engaged in the work of opening up that scene to a wider audience, as their acoustic, jazzy, and folkish elements can easily draw fans of those styles into a position to appreciate the legitimate musicality of the abrasive, sonically violent, and dissonantly deconstructive nature of the death metal soundscape.

Opeth is not a band for everyone, however. Their songs are extremely long (the average clocking in between eight and ten minutes) and musically complex. This makes their music very difficult to listen to without some dedication. A large majority of their songs demand repeated listening for full appreciation. This can make listening tedious to those who find the music alienating either for its lack of simple accessibility or death metal sensibilities. One critic put it this way: "It is very hard to be a casual Opeth fan, due to the length and complexity of their songs."

Not to be confused with Otep, as they often are.