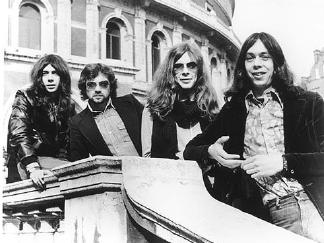 Camel are an English Progressive Rock band formed in 1971 and an important part of the Canterbury scene.

They were originally known as The Brew, which consisted of guitarist Andrew Latimer, bassist Doug Ferguson, and drummer Andy Ward. They then hired keyboardist Peter Bardens and changed their name to Camel. They released four albums together as the original four. Andy Ward was pushing the band towards a more jazzier direction, which caused Ferguson to leave and be replaced by Richard Sinclair, an ex-Caravan member; Mel Collins of King Crimson also joined. After their sixth album, Breathless, Peter Bardens left. After the release of 1981's Nude, Andy Ward left as well, leaving only Latimer. Camel eventually fell into the same hole many progressive rock bands found themselves in; struggling to retain their roots while trying to appeal to pop and mainstream audiences. In 1981, Camel left the scene until about a decade later when Latimer formed his own record producing company, Camel Productions. They eventually returned to their prog-rock roots in Rajaz. In 2002, Peter Bardens died of lung cancer. Their latest album, A Nod and a Wink is dedicated to him. After a decade long hiatus from touring, the band has performed live fairly consistently since 2013, with Latimer, longtime bassist Colin Bass, Denis Clement on drums, and a rotating keyboardist.

They're often considered one of the most underrated progressive rock bands. More people started to check them out when Mikael Åkerfeldt of Opeth cited them as a major influence.