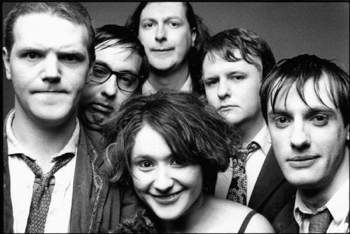 L-R: Timmy, Bill, Sarah, JIM, Dom. At the back; Tim Q
Influences:Influenced:
"Cardiacs is the one soldier during the first world war who sees death as a mischievous friend to play games with and thinks he can win. Cardiacs is also that death which dances around and slips but never falls down."
— Cardiacs Book

Cardiacs are that perfect band you've been looking for all your life but couldn't find because they're so damn obscure. Frontman Tim Smith is pretty much the only songwriter of the band. However, older brother Jim Smith is as much of a key character as Tim, bassist, batter-head, bully-bait, he's been "there" since Tim was a baby. Then there's Sarah, Tim's wife, saxophonist, pre-Seaside synth player, skirt wearer supreme, she's been "there" too.

The lineup went through a series of changes, but through all of it Tim and Jim Smith remained. In 2008, Tim Smith had a stroke and cardiac arrest, which led to the band's dissolution. Smith survived, but was left with brain damage and spent the last decade in recovery. Tim Smith said in 2018

that he had hoped to one day be well enough to reform the band, but sadly passed away in July 2020.

Despite a polarising reaction from the contemporary music press and rather limited commercial sales, Cardiacs have had a fairly significant impact on other musical acts, being cited as an influence by acts as diverse as Radiohead, Faith No More, and Blur. Cardiacs were noted for remaining ferociously independent throughout their career, releasing their music through their own label, The Alphabet Business Concern.

They've had a rather large number of releases, although some were not released in large quantities and have never been re-released. Some discographies leave out all the recordings before A Little Man and a House. You can find most of their stuff at their Bandcamp

, along with material from several related projects.

In 2021, the Alphabet Business Concern unveiled the entire Cardiacs discography onto streaming services, only to withdraw a year later in light of recent controversies involving Spotify.