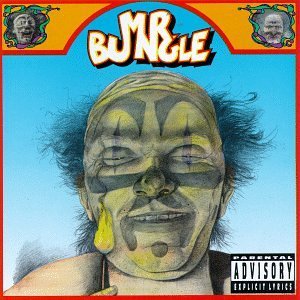 Mr. Bungle is an experimental band from Northern California. The band was formed in 1985 while the members were still in high school, and was named after a children's educational film regarding bad habits which was featured in a Pee-wee Herman HBO special in the early '80s.

The band released four demo tapes in the mid-to-late 1980s before being signed to Warner (Bros.) Records and releasing three full-length studio albums between 1991 and 1999. The band toured in 2000 to support their last album, but disbanded in 2004. Although Mr. Bungle went through several line-up changes early in their career, the longest serving members were vocalist Mike Patton, guitarist Trey Spruance, bassist Trevor Dunn, saxophonist Clinton "Bar" McKinnon, and drummer Danny Heifetz.

Mr. Bungle is also known for their music practically being the sonic embodiment of Genre Roulette. They frequently used unconventional instruments including tenor sax, jaw harp, cimbalom, xylophone, glockenspiel, clarinet, ocarina, piano, organ, bongos, and woodblocks. Furthermore, Mike Patton's vocals were performed in a variety of styles including death metal growls, crooning, rapping, screeching, gurgling, and whispering. On top of that, the arrangement of their songs often lacked structure and instead rotated through different genres ranging from slow melodies to thrash metal.

In late 2019, the band announced that they would reunite for a series of reunion shows in February 2020. Scott Ian and Dave Lombardo joined them in performing the entirety of The Raging Wrath of the Easter Bunny as well as several cover tunes. The group would go on to rerecord the demo as a professional album for release that October.

Not to be confused with the puppet who didn't wash his hands in the Beginning Responsibility: Lunchroom Manners short parodied by RiffTrax.note Though that is where they got their name, and a clip of the short appears as Spoken Word in Music at the end of "Love Is a Fist"