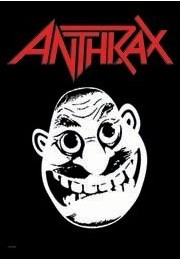 One of the Big Four of Thrash Metal (alongside Metallica, Megadeth, and Slayer), the New York City-based Anthrax was formed in 1981.

Unlike the aforementioned bandsnote Megadeth to a lesser extent than the other two, since they also have their moments in this regard, while Metallica's moments are mostly outside their music, Anthrax are known for having a sense of humor in their music - they stood out by recording quite a few songs inspired by movies and comics, and their brightly-coloured surfer appearance. They also discuss social issues in their songs ("Indians", "Who Cares Wins", etc.)

They are also one of the first metal bands to incorporate rap in their songs ("I'm The Man"), and Public Enemy joined them to do perform a new version of their hit single, "Bring the Noise"note PE’s DJ Terminator X would later have a guest spot on the song “1000 Points Of Hate".