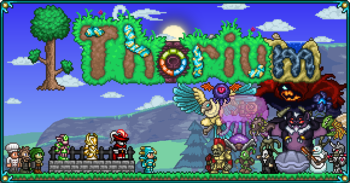 The Thorium Mod is an expansive Game Mod for Terraria, created by DivermanSam. It is often considered one of the largest, most in-depth, and popular mods that exist for Terraria, and for good reason — it adds an incredible amount of content, including numerous NPCs, tons of enemies, two entirely new damage types, and several challenging new bosses.

The Thorium Mod contains examples of: