"They spit in your eye,You'll never retreat
You resist their attack, We await the command
Together we stand, With mace In our hands
The comet burns bright, The Age is at hand..."
— Agent Steel, "Never Surrender" 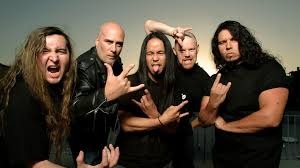 Agent Steel is a Los Angeles based Thrash Metal and Power Metal group that was founded in 1984 by vocalist John Cyriis and drummer Chuck Profus. They are notable for their hot-blooded solos and science fiction based themes mixed with social commentary. During their original run, they released two albums (Skeptics Apocalypse and Unstoppable Force) and an EP (Mad Locust Rising). Sadly, after only four years, John Cyriis disbanded Agent Steel and left the music industry entirely for a short time after becoming disenfranchised with the metal community.

Each member continued on to pursue other projects, but in 1999, Agent Steel was revived, this time with Bassist Karlos Medina (who was in Evil Dead and Terror prior) and Bruce Hall, releasing three albums between 1999 and 2007.

In 2010, Bruce Hall left Agent Steel due to loss of interest. Not long after this, original vocalist John Cyriis was confirmed to return to Agent Steel to tour. In the same announcement, the band confirmed that they were well at work on writing new material. Despite this, there hasn't been a new Agent Steel release since 2007's Alienigma.

Known for a time as Order of the Illuminati (sharing the name of their fourth album) due to copyright issues between the current band at the time and John Cyriis. It was a short lived name change.

The group's current lineup consists of: