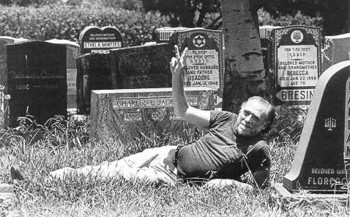 Charles Bukowski was a German-American novelist and poet. The bulk of his writing focuses on his everyday life as a working-class alcoholic in Los Angeles. His work is minimalistic, such as his poems "Bluebird," "Nirvana," and "Dinosauria, We," as well as a few of the stories in Notes of a Dirty Old Man, a collection of short pieces which originally appeared as a column in two local underground newspapers. He was also the author of the screenplay to Barfly. Bukowski died in 1994 at the age of 73.
Advertisement:

A Bio Pic directed by James Franco and starring Josh Peck has been filmed but hasn't found a distributor yet.

"Nirvana" was adapted to music by Tom Waits and available on his album Orphans: Brawlers, Bawlers & Bastards.

Works by Charles Bukowski with their own pages include:

Other works by Charles Bukowski contain examples of: