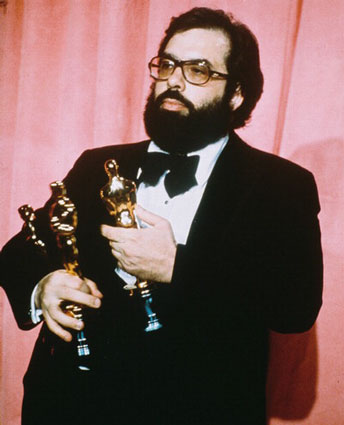 "Anything you build on a large scale or with intense passion invites chaos."
Advertisement:

Francis Ford Coppola (born April 7, 1939) is a famed American film director/screenwriter/producer, one of the paragons of The New Hollywood and best known for such works as the Godfather trilogy and Apocalypse Now.

After doing low-budget films in the 1960s and early '70s, his breakthrough was winning an Academy Award for his screenplay of Patton. George Lucas was hired to be his assistant. The two became fast friends and founded Zoetrope International Pictures together in 1971. Coppola's directing breakthrough was 1969's The Rain People, which was a box office flop, but impressed Paramount executives enough to tap him as director for The Godfather.

In 1972, The Godfather was a critical and huge commercial success, and with that recognition, Coppola shot George Lucas to fame for producing his American Graffiti and THX 1138 (the rest is history). In 1974 he directed The Godfather Part II, and The Conversation in the same year. The production of Apocalypse Now was an absolute nightmare for everyone who worked on it, but the film is widely regarded today by film critics as a masterpiece. In fact, Coppola's films had won so many Oscars that he could smelt them all down to make the most critically acclaimed suit of armor in all the land.

When the Seventies ended, Coppola's fortunes began to turn. His career stumbled with One from the Heart, which was a massive departure from the realism of his previous films and proved an expensive flop which nearly bankrupted Zoetrope. Nonetheless, Coppola remained prolific throughout The '80s, releasing Peggy Sue Got Married, featuring his nephew Nicolas Cage. He also directed The Outsiders and Rumble Fish, two "pet projects" of his, and Tucker: The Man and His Dream, largely because his father owned a Tucker. The Outsiders launched the careers of more than a few familiar actors now. In The '90s he went more commercial with films such as Bram Stoker's Dracula, Jack and The Rainmaker.

Recent projects include New York Stories with fellow famed (and Oscar-winning in their own right) directors Woody Allen and Martin Scorsese, Bram Stoker's Dracula, Youth Without Youth and Tetro. He now publishes magazines and makes wine and lives in San Francisco.

His father Carmine Coppola was the first flautist for the Detroit Symphony Orchestra, and won an Oscar scoring The Godfather Part II. His daughter Sofia Coppola became an acclaimed director (despite an ill-fated acting gig in The Godfather Part III). His sister Talia Shire was cast by him as Connie Corleone, and her sons Jason and Robert Schwartzman are also in the 'biz. His brother August is the father of Nicolas Cage. Along with the Hustons (Walter, John and Anjelica), they are the only family to feature three generations of Oscar-winners.