Film / Battle Beyond the Sun 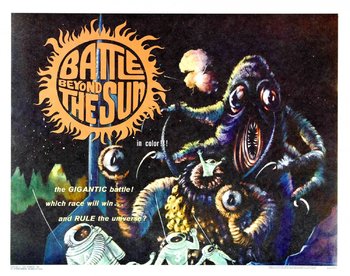 An American Cut-and-Paste Translation of the Soviet sci-fi film Nebo Zovyot, produced by Roger Corman and with a young Francis Ford Coppola tasked with directing the adaptation. The plot basically involves a space race between two future superstates: North Hemis (originally the USA) and South Hemis (originally the USSR) after a supposed nuclear war, with both nations competing in a top-secret race to be the first to land on the planet Mars.

Notable changes to the Soviet original include the obvious removal of any Soviet propaganda which might have not played well to Cold War American audiences - such as the superpowers being replaced by fictitious future ones and names being Anglicized - and the addition by Coppola of a fight between two alien monsters which are supposed to resemble male and female genetalia (come on, this is supposed to be a B-Movie after all...)

Not to be confused with Corman's later work, Battle Beyond the Stars.