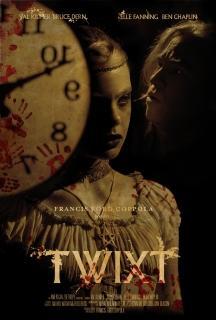 Twixt (originally named Twixt Now and Sunrise) is a 2011 film, directed by Francis Ford Coppola and starring Val Kilmer and Elle Fanning, about murders in a small town, vampires, and the ghost of Edgar Allan Poe. Or, perhaps, just about failed dreams and the writing process.

Baltimore Hall (Kilmer) is a writer, known for his witch stories, who passes through a small town with a strange clock tower and a horrific murder in its past. The sheriff, one Bobby LaGrange (Bruce Dern), is a fan of Hall, and proposes that he coauthor a book about the murders with Hall. Meanwhile, Hall attempts to find his plot (and, more importantly, an ending, so that he can secure an advance from his agent) in his dreams where he meets V (Fanning), an oddly pale red-lipped girl, at least one murder has occurred in the area involving a young girl being staked through the heart, and there's a mysterious gathering of teenagers on the North side of the lake who seem to worship death and sex under the leadership of the mysterious Flamingo (Alden Ehrenreich).