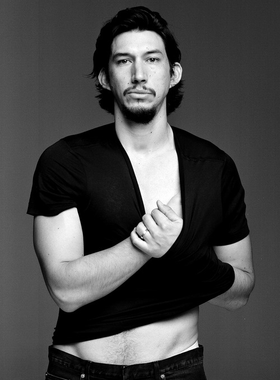 "Something I learned in the Marine Corps that I've applied to acting is, one, taking direction, and then working with a group of people to accomplish a mission and knowing your role within that team."
Advertisement:

He served in the United States Marine Corps before being medically discharged after an injury that prevented him from going to Iraq and studying acting at Julliard. He first gained prominence as Adam Sackler on the HBO series Girls, for which he's racked three Emmy nominations. Although he's now best known as Kylo Ren, the main villain of the Star Wars sequel trilogy, he has gained acclaim for his dramatic works such as Father Garrupe in Martin Scorsese's Silence and as the title role in Jim Jarmusch's Paterson. He has received Academy Award nominations for his supporting role in BlacKkKlansman and his lead role in Marriage Story.

Driver has been married to actress Joanne Tucker since 2013. The couple have a son.

Tropes associated with this actor's work: