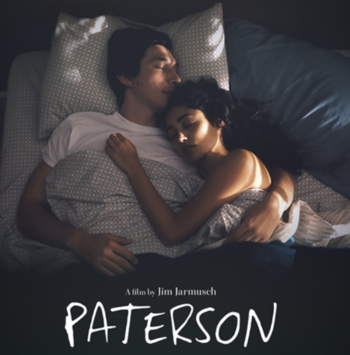 Sometimes an empty page presents more possibilities.
I go through
trillions of molecules
that move aside
to make way for me
—"The Run"
Advertisement:

Paterson is a 2016 introspective drama film written and directed by Jim Jarmusch, starring Adam Driver and Golshifteh Farahani, and distributed by Amazon Studios.

Taking place over the course of one week, the film follows a man named Paterson who works as a bus driver in the town of Paterson, New Jersey. Throughout the day, Paterson entertains himself by listening in to the conversations of those around him, whether they be patrons on his bus or familiar faces at the bar he frequents. Every morning, he wakes up next to his faithful and eccentric wife Laura, and every night he takes her dog Marvin on a walk before returning home to her and going to bed. Paterson's primary quirk is that he takes his notebook wherever he goes and writes poetry, which Laura tries to get him to publish despite a lack of interest from her husband.

That's pretty much the whole movie right there. Typical to Jarmusch, it's a film that takes its time and concerns itself with the characters' consideration of their atmosphere more than anything else.