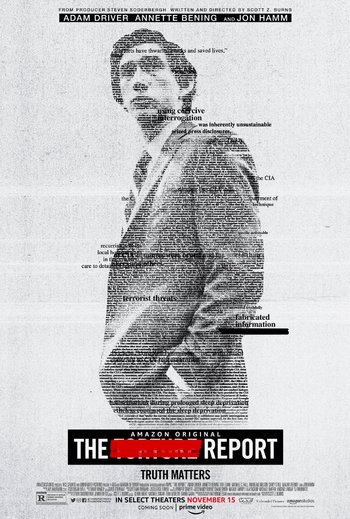 How Far Would You Go to Find the Truth?
Advertisement:

The Report is a 2018 thriller written and directed by Scott Z. Burns and produced by Steven Soderbergh.

It tells the true story of the 2012 Senate investigation into the CIA's use of torture in the wake of 9/11. Adam Driver stars as Daniel J. Jones, an idealistic staffer for California Senator Dianne Feinstein (Annette Bening) tasked with leading the investigation and uncovering the evidence and discover the lengths to which the government went to shield themselves from accountability.

The movie also stars Ted Levine, Michael C. Hall, Maura Tierney, Corey Stoll, and Jon Hamm. It premiered at the 2019 Sundance Film Festival ahead of a general release on November 15. The trailer can be seen here

Tropes Associated With The Report Include: