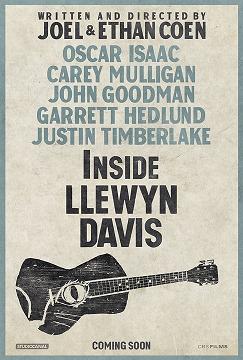 Inside Llewyn Davis is a 2013 comedy-drama film directed, written and co-produced by the Coen Brothers. The story follows the titular character (Oscar Isaac), a Greenwich Village folk singer, travelling through New York and Chicago over the course of one week in 1961. Despite being a talented musician, nothing in life seems to be working out for him, and his confrontational, careless and self-destructive personality only serves to sabotage his situation further. The supporting cast includes Carey Mulligan, Justin Timberlake, John Goodman, Adam Driver and F. Murray Abraham.