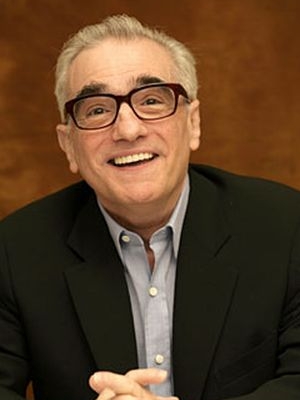 He could probably say all the words right next to this picture in under 10 seconds.
Influences:
"My whole life has been movies and religion. That's it. Nothing else."
Advertisement:

Martin Charles Scorsese (born November 17, 1942) is an American filmmaker of Italian descent, born in New York City and raised in the neighborhood of Little Italy. He began his career as part of the New Hollywood generation of film school students, and is regarded as one of America's (if not the world's) greatest filmmakers and one of the most influential in the latter half of the 20th century.

He gained fame in The '70s for his gritty urban dramas starring Harvey Keitel and Robert De Niro, movies that were shocking for their visual invention, unconventional editing, intense performances and graphic violence. They made him a critical favorite, culminating in Taxi Driver.

After the commercial setback of New York, New York and Raging Bull, he entered an uncertain and uneven period in The '80s, but returned to public and critical favour with Goodfellas, after which he entered a new prolific period where he has averaged one film every two years since 1990. He remains active well into the 21st century, winning Academy Awards for Best Director and Best Picture for The Departed after being a notable case of Award Snub for more than 30 years.

Scorsese is best known for his films about The Mafia but he has in fact made films in a wide variety of genres: documentaries, concert films, music videos (Michael Jackson's "Bad"), literary adaptations (The Age of Innocence), family films (Hugo, itself a literary adaptation), Black Comedy (The King of Comedy, After Hours, The Wolf of Wall Street), Biopics and religious films.

Scorsese is also well known in the wider media since the 80s for his advocacy of film preservation and restoration, serving as a founder and an active spokesman for The Film Foundation and the World Cinema Foundation. He raised attention for the decay of film stock and the preservation of film prints of several film-makers, both well known and obscure. He also champions cinema as an artform and has devoted considerable attention to restoring the reputations of forgotten film-makers and supporting up-and-coming artists from across the world. He was also, along with Sydney Pollack, one of the most fervent advocates for presenting films on home media in their original aspect ratio, long before the practice became standard.

As much as he prefers having his films in cinemas, Scorsese has bowed to the market reality with the rise of video streaming. For instance, his expensive gangster film, The Irishman, which was rejected by all of the major studios, was picked up by Netflix for its drive for Oscar credibility. Now, Scorsese has a First-Look agreement with Apple TV+ for his future projects.

He uses many of the same actors in his movies, including Robert De Niro, Joe Pesci, Harvey Keitel, and Leonardo DiCaprio. Publicly, he's well-known for his big, bushy eyebrows, his breakneck rate of speech, and having a physical staturenote He's 5'4"; in the Hugo premiere pictures, he was shorter than a still-prepubescent Asa Butterfield inverse to his standing as a filmmaker. Aside from filmmaking, he also does occasional acting, in his own movies and others.

He also appeared in Shark Tale.

Important books on Scorsese's career include: Martin Scorsese: A Journey by Mary Pat Kelly, The Scorsese Picture by David Ehrenstein (for early Scorsese from his student films to The Last Temptation of Christ), Conversations with Scorsese, which consists of several, long interviews from Scorsese by Richard Schickel in the style of Hitchcock/Truffaut, the long-running constantly updated Scorsese on Scorsese oral interviews (by Ian Christie and David Thompson) (for middle Scorsese: Between Goodfellas and Gangs of New York) note Not to be confused with the similarly named volume by Michael Henry Wilson which is also recommended, and Scorsese by Ebert, a compilation by critic Roger Ebert of all his reviews of Scorsese's movies as well as additional essays, interviews, and analyses of his career.

Tropes common to Scorsese and his works include: