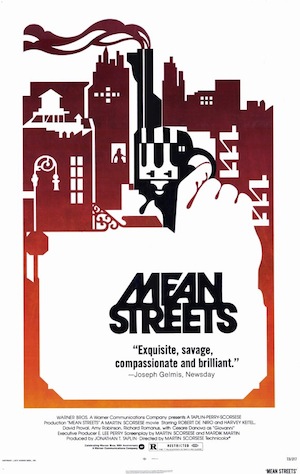 "It's all bullshit except the pain. The pain of hell. The burn from a lighted match increased a million times. Infinite. Now, ya don't fuck around with the infinite. There's no way you do that. The pain in hell has two sides. The kind you can touch with your hand; the kind you can feel in your heart... your soul, the spiritual side. And ya know... the worst of the two is the spiritual."
— Charlie Cappa
Advertisement:

Mean Streets is a 1973 film directed by Martin Scorsese and starring Harvey Keitel as Charlie, a morally and spiritually conflicted young mobster, and Robert De Niro as Johnny Boy, his immature and irresponsible best friend. Charlie has his hands full keeping the reckless Johnny Boy on the straight and narrow. At the same time, Charlie is having an affair with Johnny's cousin, Teresa, but keeping it secret because Teresa is an epileptic and the community shuns her for this.

The film was Scorsese's Breakthrough Hit, establishing him as a major talent, and proved to be DeNiro's Star-Making Role. It was seen as the counterpart to The Godfather as it took a gritty, down-to-earth approach to the Italian American mob, showing them without the Affably Evil stylizations of Coppola's film. Much of what came to be Scorsese's Signature Style is visible in this film, including stylized camera movements, sudden violence, troubling religious iconography and use of popular music as scores.

It was also the first of Scorsese's films to deal with the mob, a subject he returned to with GoodFellas and Casino, later noting that all three films represent an informal trilogy of the Italian American mob from low-level hoodlums to power brokers.