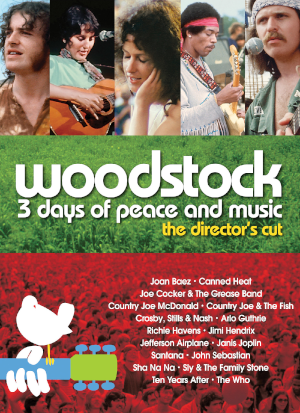 We must be in heaven, man!
"Three days of peace, love and music."
Advertisement:

In the Summer of '69, a couple of extremely rich young men wanted to create something they could invest in related to entertainment, art and creativity. After initially planning a TV series and an artists' colony, they decided to hold a festival in a field, with a few big name acts. After a long fight to get it done, they got a deal with farmer Max Yasgur. The festival was called the Woodstock Music and Art Fair.

Woodstock was a giant catastrophe: The bands couldn't get to the concert and had to be flown in. Food and other facilities were ostensibly planned for 50,000 (even though the aforementioned 100,000 tickets had been sold), but city councilmen and others noted that the provisions weren't even sufficient for that number, leading to the National Guard airlifting in food and water by helicopter. There was lots of rain and a giant storm struck, shutting it down for hours and two people accidentally diednote  plus one from a burst appendix, but that probably would have happened anyway.

But at the same time the festival was noted for its sense of peace. The crowd was so peaceful over the three days that even the mainstream media like The New York Times praised the event for being so orderly with a well behaved audience. Two people were born there.note Other reports have four births, with at least one taking place in a car on the way there. People were getting along and showing love to each other. Not only that, but the roster of bands were great. These included The Who, The Band, Janis Joplin, Crosby, Stills, Nash & Young,note However, the film credits them as "Crosby, Stills & Nash", as Neil Young found the camera crew intrusive and does not appear in footage of their performance. Canned Heat, Ten Years After, Joe Cocker, Sha Na Na, Santana, The Grateful Dead, Creedence Clearwater Revival, Joan Baez and Jimi Hendrix, to name a few.

The festival was filmed and turned into a documentary, titled simply Woodstock, which was released in 1970. It was directed by Michael Wadleigh. It is regarded as one of the best documentaries and concert films ever. Not only because of the performances, but also because the main focus was the festival itself — the audience. Martin Scorsese got one of his first Hollywood jobs as a film editor for the movie. Most importantly for the producers, the film proved so big a box office hit that its earnings more than paid off the losses from the festival itself.

The festival's original location is currently home to The Bethel Woods Center For the Arts, which not only hosts three performance stages (including an amphitheater just north of the field where main stage of Woodstock stood), but and honest-to-goodness Woodstock Museum

, which gives an in-depth look at the counter-culture that inspired the event, as well as the historical events leading up to it.

There's more background information at The Kind of Complete Woodstock

, and at Woodstock Complete

which strives to combine all known sources and re-create the Woodstock Festival of 1969 as it took place. An authorized version of the complete original concert

— all but four songs are included — was released on Rhino Records for the 50th anniversary in August 2019. It has 38 discs, a Blu-ray of the film, and some gifts, and was priced at $800 in a limited-edition printing of 1,969 copies (it sold out quickly).

"This thing was too big. It was too big for the world. Nobody has ever seen a thing like this. And when they see this picture in the newsreels, they'll really see something."