Film / A Time for Burning 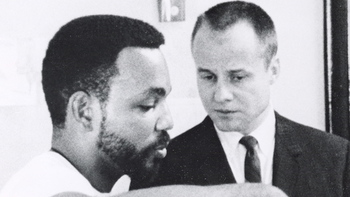 A Time for Burning is a 1966 documentary film directed by William C. Jersey.

This perfectly mild and harmless idea sets off a firestorm of controversy. It soon becomes apparent that the good folks of Augustana Lutheran, despite their protestations of Christian faith, don't want to be spending any time with black people. The black Lutherans of north Omaha, for their part, are scornful of white people who profess to be Christians but don't follow God's teachings. Most outspoken is Ernie Chambers, a barber from north Omaha who is not afraid to call out white supremacy in uncompromising terms.

Four years after this movie was filmed Ernie Chambers ran for the Nebraska state legislature. He served there for 38 years, becoming the longest-serving legislator in Nebraska history, remaining a fire-breathing radical the whole time. In 2012 he won back his old seat.

Augustana Lutheran is still a house of worship