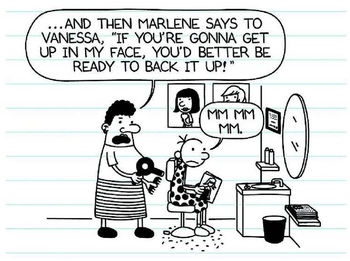 Come for a buzzcut, stay for the buzz.
"I forget what she said next. You know how those creatures are, babble, babble, babble, babble, and never let up for a minute! When suddenly she said: 'I know the girl who's being kept by Mr. Haines!'"
— Sylvia, The Women
Advertisement:

You might be there for for any number of things: a trim, a shampoo-and-set, a perm, a dye job, or possibly a facial or manicure. But she's there for only one thing: to talk. Compliments, quirky personal anecdotes, urban legends, the latest gossip, and romantic advice come free with the purchase of any beauty treatment. If you're lucky, it's just comic relief. If not, plot may come crashing down on your head.

The Chatty Hairdresser is usually female, and possibly a Sassy Black Woman. If male, he's most likely to be portrayed as a Pet Homosexual with Camp Gay mannerisms out the roof.

Distaff Counterpart to both The Barber and the Always Male chatty cabdriver.

Tell Me Something I Don't Know

In the musical number "No Me Diga", the women at the salon gossip about the love lives of Vanessa and Nina.

Tell Me Something I Don't Know

In the musical number "No Me Diga", the women at the salon gossip about the love lives of Vanessa and Nina.