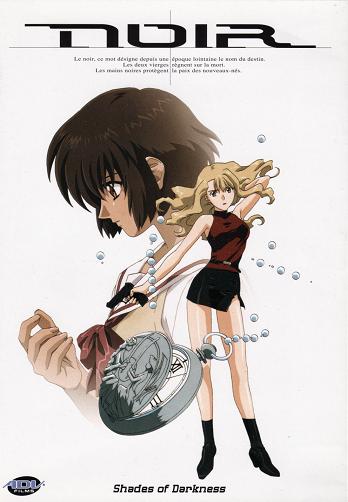 Noir is an action-conspiracy anime which first aired on TV Tokyo in 2001.

Mireille Bouquet is a professional assassin operating out of Paris under the pseudonym "Noir." Obsessed with the unsolved murder of her parents when she was a child, Mireille finds an unexpected clue when she receives a mysterious message from a 16-year-old girl in Japan named Kirika Yuumura. She flies to Tokyo to meet Kirika, and they team up, both professionally and for the investigation of their respective pasts.

Between the various emotionless contract killings that keep food on their table, Mireille and the amnesiac Kirika (who is a deadlier assassin than Mireille herself) delve into their own pasts, even though Kirika eventually begins to doubt whether even her own name is true. Discovering one confusing lead after another, they soon find themselves plunged into a dangerous world of both organized crime and international conspiracies spanning centuries of history. The source of all this is the organization called Les Soldats, and a high-ranking member, Mistress Altena, sends waves after waves of hitmen to accomplish a mysterious plot. At the end, they will discover who they are, what they mean to each other, and the secret behind the name "Noir."

This series takes inspiration from the Film Noir genre, but should not be confused with it. It was created by studio Bee Train (and made it famous effectively overnight) and was followed up by two more Girls with Guns series — Madlax and El Cazador de la Bruja — though these are more Spiritual Successors than sequels.