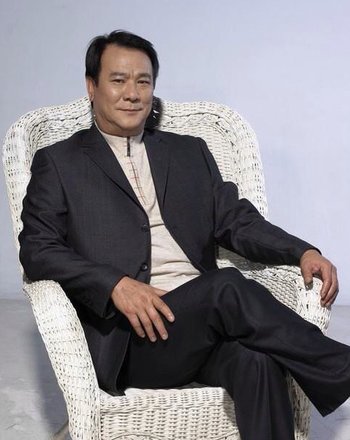 Danny Lee Sau-yin (李修贤, born 1952 in Shanghai, China) is an actor, producer, screenwriter, and director, best known to western audiences for his role in The Super Inframan and The Killer. If he looks familiar to Hong Kong film aficionados, just pick a random Hong Kong film about cops in the 1980s, and 7 out of 10 times, Danny Lee will be the cop.

As a youngster, Lee did not perform well in school, but have grown up admiring policemen and cops, desiring to be a police officer. Unfortunately, being a high school dropout, Lee failed to complete police training, despite excelling in black belt judoka and karateka and proving himself a competent fighter in the police force, at which point Lee decides to change a direction in his lifelong interests instead.

Hong Kong was then in the boom of martial arts movies, with the Shaw Brothers studios producing films and seeking fresh talent. Starting off as an extra who fought the likes of David Chiang and Ti Lung while in his early twenties, Lee's career would finally kick off when he starred in the cult-classic, The Super Inframan, at age 23. The film's campiness and Chop Sockey value makes Lee a popular choice for the studio, and after appearing in The Mighty Peking Man, Lee becomes a mainstay at Shaw Brothers.

Unable to forget his former passion of becoming a policeman, Lee decides to delve into the crime genre, giving himself a chance to portray fictional policemen, since he couldn't become the real deal. His 1979 role, The Brothers, which is about two brothers on different sides of the law being torn apart by their conflicting loyalty and honour, is notably the inspiration for John Woo's classic, A Better Tomorrow.

As the decade goes on to the 80s, Lee would move from Wuxia and martial arts cinema into crime and police drama, with Lee being the onscreen cop most of the time. Fans of Heroic Bloodshed cinema would notice Lee in The Killer, Just Heroes, Powerful Four, and plenty of similar movies featuring Lee as the kick-ass law enforcer on the opposing side of gangsters, a heavily fictionalized ideal image of the archetypal real-life Hong Kong policemen.

Besides acting, Lee is also a director and producer, especially prevalent in the 90s. Lee's production company, Magnum Films, created some of Hong Kong's nastiest, CAT-III classics, such as The Untold Story, Dr. Lamb, Run and Kill and plenty of other films.

While Lee seemed to have slowed down after 2000, after appearing in 140-odd films note  his last major release which he plays a significant role is 2008's Fatal Move, even though he's merely a supporting player, and yes, once again he's playing a cop , however Lee still remains having an active role in directing, producing, or promoting films, usually in behind-the-scenes work.