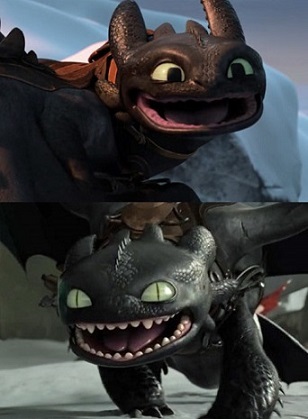 Goodies and baddies are distinguished by the size of their eyes. The Hero, the All-Loving Hero, and the Wide-Eyed Idealist will all have big, open, happy, trustful, Puppy-Dog Eyes. On the other hand, the Magnificent Bastard, Evil Overlord and Card-Carrying Villain will have narrow, shifty eyes. Might be because large eyes makes the face appear more infantile. See also Beauty Equals Goodness.

However, this trope is slightly more complex than it used to be. Instead of one eye size for goodies and another for baddies, there is a continuum between the Friend to All Living Things and the Big Bad reflecting just how good or bad a character is. On the side of good, the Anti-Hero willing to Shoot the Dog has eyes narrower than the hero's but wider than those of the villain. Villains with wider eyes tend to be of the Knight Templar, Well-Intentioned Extremist, or Anti-Villain types; either that, or they will Pet the Dog a few times.

In a Slice of Life series without heroes or villains, narrow eyes are often used to indicate The Cynic.

See also Scary Shiny Glasses. Note that characters who have their Eyes Always Shut do not really fit anywhere on this continuum, as they tend to symbolize something else entirely, whether good or evil. When this trope is used with critters or monsters, it's Big Eyes, Little Eyes.

Likely unrelated but interesting nonetheless is the fact that ancient cultures often portrayed spiritual people in their art with gigantic eyes. They apparently believed that wider eyes meant someone was more capable of communicating with their gods.