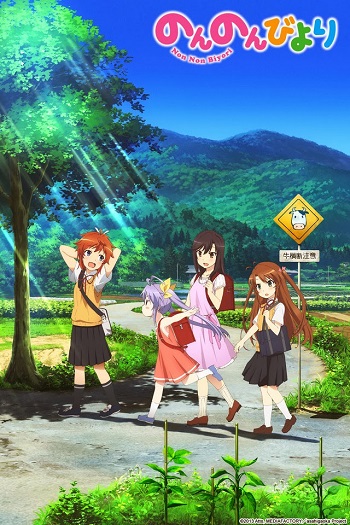 Meowning! note L - R: Natsumi, Renge, Hotaru and Komari
This is my village. It's a quiet, peaceful place. But sometimes I think... Do I actually live in the country?
-Renge Miyauchi, from the opening lines of the anime.
Advertisement:

Hotaru Ichijo is a fifth grader from Tokyo who moved with her parents to Asahigaoka, a small village in rural Japan. In Asahigaoka, conveniences are located many kilometres away, and the local Asahigaoka Branch School consists of only five students, the teacher's little sister Renge (aged six), sisters Natsumi and Komari (ages thirteen & fourteen), and their older brother Suguru (aged fifteen), each of whom come from different grades of elementary and middle school. With her new-found friends, Hotaru begins to adjust to life in the countryside.

Non Non Biyori is a Slice of Life manga by Atto which was published in Monthly Comic Alive from 2009 to 2021. Its anime adaptation premiered during the Fall 2013 Anime season and was animated by Silver Link. This was followed by an OVA, which features the cast preparing a trip to Okinawa.

A second season, titled Non Non Biyori Repeat, aired during the Summer 2015 Anime season, and takes place between the events shown in the first season. A second OVA followed, covering most of the chapters of the manga up to that point. Both seasons are available to watch at Crunchyroll

. A movie, titled Non Non Biyori Movie: Vacation, premiered in July 2018, and adapts the girls' trip to Okinawa; the movie has been licensed by Sentai Filmworks for future release in North America. The third season, Non Non Biyori: Nonstop aired between January and March 2021.