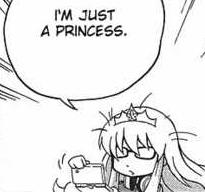 What's wrong with this picture?
Advertisement:

The time: 201X. In the peaceful Hinomoto kingdom, three rookie military officers, Haru, Natsuki and Touma are assigned a very special mission: Protect Princess Amano Terrass! Of course, this is an extremely cushy gig, since Princess Amano hasn't left her room in years!

Of course, Haru can't get over the idea that a real life princess is right past that door... And can't leave well enough alone. He finally gets inside her Fort Knox style room, only to discover the horrible, horrible truth: Princess Terrass is a total Otaku Hikikomori!

What follows is a slapstick combat scene across the entire castle (while equipped with a AK-47... on a Segway... With a Katana backup...), the first time anyone's seen Amano in years — the oldest butler at the castle has to be the one who confirms it. She quickly freaks out and runs back to her room, but the damage is done: The Queen and King found out, and are very interested in how some clueless bodyguard could get their princess to leave her shell, however briefly...

Not related to the UK slang term NEET which is short for a Lower-Class Lout "Not in Education, Employment or Training."