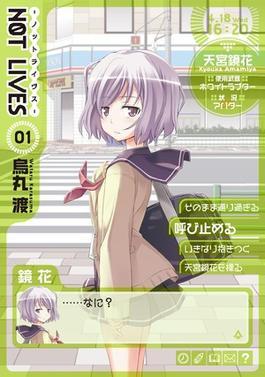 Volume 1 of the manga, with Amamiya Kyouka

Not Lives (ノットライヴス Notto Raivusu) is a manga series written and illustrated by Wataru Karasuma. The series has been concluded as of 2017, with 10 volumes having been published by ASCII Media Works' Dengeki Daioh Magazine since August 2011.

Shigeru Mikami, an avid video game fan and video game designer, is obsessed with creating the perfect video game, the likes of which no one has played before. While collecting video games for his research, he comes across a strange disc named 'Not Alive.' After playing it, he is brought into a video game world where he controls a female avatar named Amamiya Kyouka. Thing is, that "avatar" turns out to be real person — and if Mikami loses, Kyouka will die and Mikami will be forced to be the new avatar. As Mikami progresses through the game, the two of them must use their skills to their advantage as they fight other players and avatars.

Not Lives contains examples of the following tropes:

Kyouka: Mikami-kun...we're going to have a talk later.

GM: The Winner is You!