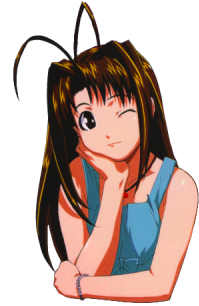 Something is bugging me about your hair.
Two strands of hair that stick up from the top of the head and curve forward like antennae, a style popularized by Love Hina and other works by Ken Akamatsu. Probably will belong to someone... lighter in disposition or in general intellect. Yet another way to quickly and simply add another visual quirk to a character.
Advertisement:

If the character has only one strand, it is Idiot Hair. Not to be confused with Devilish Hair Horns, which is a more villainous permutation.