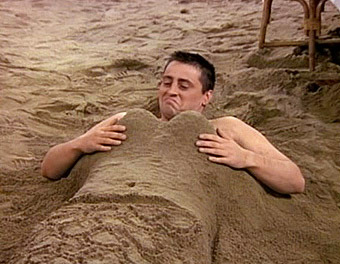 Nothing could go wrong… other than big waves… or children… or a weird tan line.
Advertisement:

It's the Beach Episode! What Could Possibly Go Wrong? Well, for one, Genre Blind characters will let themselves be buried in the sand, Hilarity Ensues when the gravediggers forget they're supposed to dig him out as well, or they forget where he is, or angry crabs pass by, or something prevents them from finding him again, or… well, you get the idea.

A common variation involves the diggers using the sand to make a sand body for the exposed head, usually involving a shape that would be embarrassing to the buried person.

If you're doing this to kill the buried person by having the tide drown him, it's a Sand Necktie.