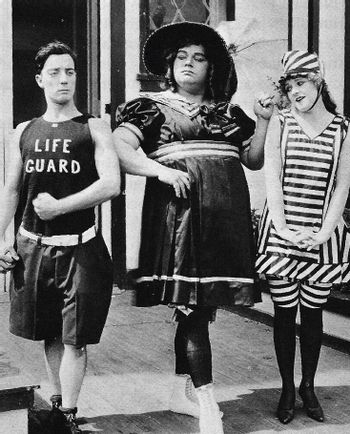 Coney Island, aka Fatty at Coney Island, is a 1917 film starring Fatty Arbuckle and a young Buster Keaton. This film, directed by Arbuckle, features Fatty as a Henpecked Husband who escapes from his nagging wife for some fun at the famous Luna Park on Coney Island. Keaton plays a young man who wants to take his girl to the park, but doesn't have money for tickets, whereupon she goes to the park with another admirer. Said admirer is also an old friend of Fatty's wife. Fatty also hits on Buster's girlfriend after entering the park. Hilarity Ensues.

One of fourteen films that Arbuckle and Keaton co-starred in before Keaton went solo and Arbuckle's career was destroyed by the Virginia Rappe scandal.