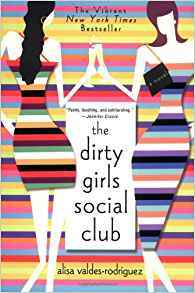 The Dirty Girls Social Club is a 2003 novel by Alisa Valdes (formerly Valdez-Rodriguez). The novel explores the lives of six Latina women, all best friends from their Boston University days: Lauren, "half-New Jersey Cuban and half-white trash", who's the the Boston Gazette's "caliente" journalist; Sara, a white blonde-haired, blue-eyed Cuban Jew who's seemingly living the happy life as a wealthy stay-at-home mom and is married to her hot lawyer husband, but her lifestyle comes at a price; Amber, a Mexican American singer who is a proud member of the Mexica movement, and seeks her big break in music; Elizabeth, a gorgeous Afro-Colombian who is a born-again Christian, and is loved by her community, but hides a big secret that could ruin her; Rebecca, a self-declared "Spaniard" who owns the famous Latina magazine, Ella, and cannot understand the man she's currently married to; and Usnavys, a half-Dominican half-Puerto Rican who's vice president of the United Way, and dreams of getting a man who can maintain her expensive lifestyle.

Despite being of different races, religions, and socioeconomic backgrounds, these girls (who jokingly refer to themselves as the sucias) find commonality in their shared Latina heritage. As per a post-graduation promise they made to each other, the six friends get together every six months to share stories of their daily lives.

The novel gives examples of: