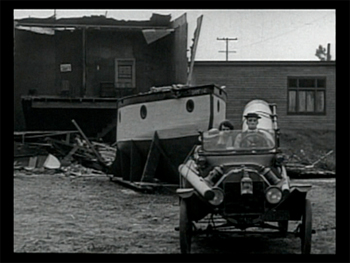 Amazingly, it gets worse.
Eight bells and all's NOT well.
— Opening title
Advertisement:

Family man Buster Keaton wants to take his brood on a cruise in his homemade boat, but first he has to get it out of the basement and afloat, and then...Hilarity Ensues.

Long-believed lost until collector Raymond Rohauer found it amidst a cache of rare Keaton footage. Although salvaged, it shows distinct signs of decay.

"The Boat" contains examples of: