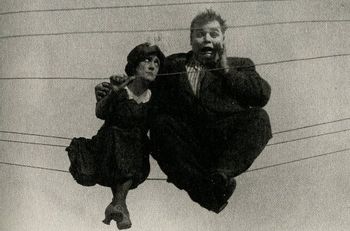 Fatty's Tintype Tangle is a 1915 Slapstick Farce starring Roscoe "Fatty" Arbuckle. In this two-reel short, Fatty stars as a husband who loves his wife but is browbeaten by his domineering mother-in-law. After taking several swigs from a jar of liquor to boost his courage, Fatty tells off his mother-in-law and walks out. He goes to the park, and sits on a bench next to a woman who has recently arrived from Alaska to her husband. A photographer in the park mistakes Fatty and the woman for lovers and snaps a picture (a "tintype"). The husband also misreads the situation and threatens Fatty with violence. After the husband threatens to murder him, Fatty heads out of town. Unfortunately, he misses his train. Even more unfortunately, his wife decides to go back to her mother's and rent out her house—to the same wife and jealous husband that had the encounter with Fatty in the park.

This lively short was longer than most Arbuckle films, at two reels (20 minutes) instead of the usual one reel. It features a surprising stunt in which a terrified Fatty attempts to flee by tightroping across power lines. Fatty's Tintype Tangle was inducted into the National Film Registry in 1995.