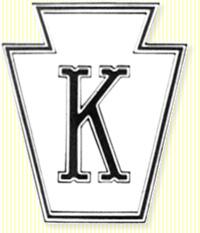 One of the quintessential studios of The Silent Age of Hollywood, Keystone Studios helped define much of Silent Movie comedy. It was formed in 1912 by Mack Sennett, veteran of the Biograph film studio, with Adam Kessel and Charles O. Baumann of the New York Motion Picture Company as his financial backers.

Unlike many of the major studios of the time, Keystone had a more Improv approach to film making, at least in its early years. For instance, most of its comedy shorts were produced without a set script and were often shot taking advantage of some event happening in the local area. For instance, Kid Auto Races at Venice was filmed during a go-kart tournament that happened to be running at the time and Sennett sent a camera crew to shoot Charlie Chaplin improvising some mischief as the Tramp at the event. Also, the studio would often film simple comedies in a local park colloquially called "Park pictures" where the cast improvised a scenario there. The studio was also famous for its Bathing Beauties: films of young women cavorting in typical swimwear of the time.

The studio started the careers of many of important early film comedians like Mabel Normand, Roscoe "Fatty" Arbuckle, and Charlie Chaplin. The studio was also known for the Keystone Kops, a bunch of bumbling police officers, but they were not as important as popularly thought today. Typically, they appeared when the film story's slapstick hijinks climaxed with such raucous silliness that the Kops were called in, only to contribute to the chaos instead of stopping it.

The studio innovated comedy standards like the Pie in the Face gag and got more artistically ambitious, such as creating the first comedy feature film, Tillie's Punctured Romance, which starred virtually all the stars of Keystone.

Unfortunately, Sennett was typical of studio heads at the time for being notoriously stingy with the talent, and many of his stars left for better offers. For instance, Chaplin was hired only because Sennett's current star, Ford Sterling, was preparing to walk and needed to be replaced, and Chaplin himself only spent a year there before he left the studio himself.

Eventually, time passed the studio as Sennett left to become an independent producer, while Chaplin and his contemporaries changed and upgraded the artistic quality of film comedy too much for Keystone to keep up. The studio closed in 1935.

However, the studio grounds are still in use for CBS as the CBS Studio Center.