The Friends Who Never Hang 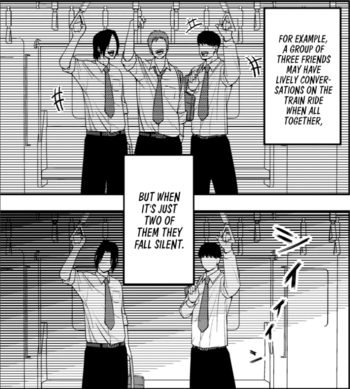 Annie: This is really important to me, Abed. Could you please go as my friend? My really good friend?
Abed: Well, I didn't realize we were really good friends. I figured we were more like Chandler and Phoebe; they never really had stories together. ...Sure, I'll do it, Chandler.
— Community, "Social Psychology"
Advertisement:

A series is shown to have an ensemble cast with a Limited Social Circle group of friends as its main characters. Naturally an ensemble cast allows for several different smaller pairings within the larger grouping. This mixing and matching allows for the audience to see the interconnectivity of each of the characters' lives on one another. It also allows for different storylines to showcase how one character may relate to another by giving them their own subplot, even if it's just for an episode or two.

But then there are those two characters within the same group of friends who almost never seem to hang out. When the group is all sitting around on The Couch in their Social Semi-Circle, these two friends will converse and talk with one another, and may even talk about funny things they've done in the past together, revealing how well they actually know each other, but on-screen, to the actual audience, they never have plots together or seem to do anything with each other. This is usually due to the writers being stumped on what to do with the two characters when they're alone together because they lack a certain chemistry. Maybe it's because of the way that the two characters are crafted in that they are too dissimilar from each other to be plausible Those Two Guys, Heterosexual Life-Partners, or Love Interest, but not so different that they could make an interesting Odd Couple, Vitriolic Best Buds, or just Foils in general. Sometimes, there simply aren't any opportunities for the characters to spend time together, especially if they meet each other late in the story.

This trope seems particularly relevant for early seasons of a TV show, whereas by later seasons the writers are more willing to try (and exhaust) all combinations of characters. For the most part it's only in TV-land that people with full-time jobs (be it as a professional or as a housewife) can hang out together all the time. In real life, you have to actively make time for that.

Instances of this trope can be especially detrimental if one or more characters become a Spotlight-Stealing Squad, and as a result only the cast members they usually interact with are utilized as foils while those they failed to gain chemistry with are ultimately Demoted to Extra due to not having enough relation to the usual recurring cast. See also Satellite Character, for when a character is designed to interact with only one cast member or fraction in particular. Not to be confused with 24-Hour Party People, who are also supposedly friends but don't hang out in any context other than a few infrequent parties.

This can be Truth in Television, especially if the friendships are based mostly on proximity (for example, a spouse/partner or relative of one of your friends, or a social group in school) or if the individuals have little in common with each other but both enjoy hanging out as part of a group.

Compare Ships That Pass in the Night, which is what happens when fans ship a pair of characters that rarely or never interact.

The Gang Mixes It Up

Fred tries to prevent this trope by changing how the gang splits up, only for him and Shaggy to quickly find out why they never spend time together.

The Gang Mixes It Up

Fred tries to prevent this trope by changing how the gang splits up, only for him and Shaggy to quickly find out why they never spend time together.