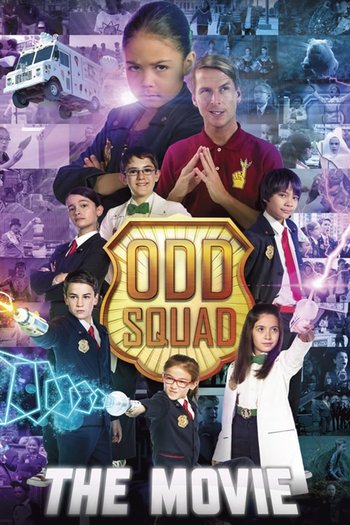 Odd Squad: The Movie is a theatrical film based off of the TV show Odd Squad. It was a limited-time feature, being screened in 90 Canadian theaters on July 16, 2016 and premiering on PBS Kids two weeks later on August 1, 2016. It takes place during Season 2, and is set after the events of "Oscar Strikes Back".

Odd Squad faces a new threat when a competing, adult-run organization called the Weird Team, led by Weird Tom (Jack McBrayer) and Weird Emily (Hannah Simone), begins solving cases at a rapid-fire pace with the aid of a gadget that can fix any odd problem in existence. As a result, the Big O decides to shut down Odd Squad as an organization, disbanding all precincts and forcing agents to return to their normal lives. As Oprah, Olympia, Otis and Oona struggle with not having Odd Squad to lean on, they soon find that Weird Team's gadget merely covers up oddness as opposed to solving it. Banding together with Olive, Otto and Oscar, who are also out of a job, the group works together to stop Weird Team for good. However, in the process, a new can of worms is opened: Daves — odd-looking orange creatures who can only say their own name — breaking out of their room and escaping into the city, all while multiplying by the second. The seven ex-agents must band together with Weird Tom and the rest of the Weird Team to stop the invasion before the Daves cause mass destruction.

The movie is notable for having Dalila Bela, Filip Geljo, and Sean Michael Kyer reprise their roles as Olive, Otto and Oscar, respectively, which also marks all three actors' final contributions before departing from the franchise entirely. It's also Sinking Ship Entertainment's first theatrical movie, as they would later enter the film market with another Odd Squad movie, Odd Squad: World Turned Odd, in 2018, and Dino Dana: The Movie in 2020.

. PBS Kids also has their own promo for the movie which you can watch here

Oona: Hey, what does that button do?
Oscar: Oh, uh, this one? It ends the list of tropes.
[beep]