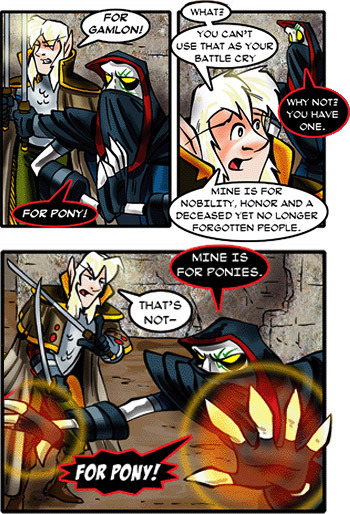 Ponies need heroes, too.
"Today Is a Good Day for Someone Else to Die!"
— Traditional Dwarf battle cry, Feet of Clay
Advertisement:

It's time for the hero to go to battle, to take action, to strive. Surely such a moment is worthy of an exclamation. If the hero (and it's almost always a hero) is up to it, he might produce a one-off Pre-Asskicking One-Liner suitable for the occasion. It's not rare, though, to instead utter an appropriate Catchphrase: the hero's trademarked Battle Cry.

A Battle Cry is usually written in title caps, and ends with an exclamation point or three.

This is more frequently a convention of comics, animation and video games than of live action, for some reason.

They have also appeared historically in Real Life. Helps with Friend or Foe situations.

A common variation is calling out "Geronimo!" while leaping from a great height (usually when parachuting out of a plane). This is derived from the 1939 film Geronimo.

Compare Rousing Speech. Screaming Warrior is sometimes an instance of this trope. Might also manifest as the dreaded Funny Bruce Lee Noises.

Contrast In the Name of the Moon, which is a longer speech and happens before the fight really starts.

The video game with the same name can be found here.