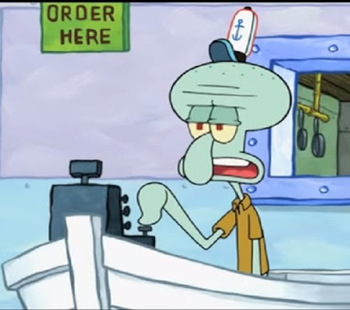 Sometimes in fiction, cashiers and clerks will be portrayed as apathetic. Often bored with their job, they might not be aware of what's going on around them. Will likely get annoyed when asked to do work. Expect them to turn a blind eye to suspicious purchases, if they notice them at all. Won't stop children from buying age-restricted items, (i.e. cigarettes and alcohol). Their personality will run the gamut from friendly and perky, but just doesn't like to do their job, to outright bitter and even hostile to the customers.

Related to The Slacker and Apathetic Citizens. This is often a first job for a Bratty Teenage Daughter. May result from working a Soul-Sucking Retail Job. Overlaps with Burger Fool. In cases where the cashier is apathetic to nightmarish working conditions, this will become Conditioned to Accept Horror. Compare to the Super-Stoic Shopkeeper, who doesn't react to extreme events, but generally still does their job. Contrast with Creepy Gas Station Attendant, where a character working a menial job is Played for Horror as opposed to comedy. Also contrast Haughty Help, where people the people providing service are disdainful rather than apathetic.