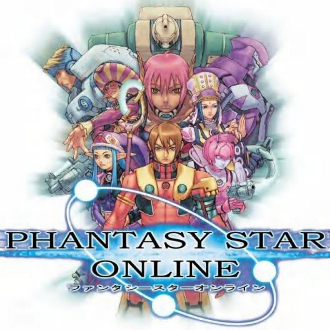 You are not the only hero.
Advertisement:

Phantasy Star Online is a Massively Multiplayer Online Action RPG developed by Sonic Team for the Sega Dreamcast and later released for the PC, Xbox and Nintendo GameCube that carries on the legacy of the Phantasy Star franchise.

This story seems to take place a very long time after the original tetralogy. The story begins with a planet called Coral, whose environment has been destroyed due to a prolonged period of warfare. Seeing no other hope for survival, the nations of Coral band together and plan a mass-exodus to a new homeworld in space.

Their first colony ship (Pioneer 1) discovers an ideal planet called Ragol, and begins preparations for the colonization. One year later, the second colony ship (Pioneer 2) arrives in orbit around Ragol. However, just as they establish contact, a mysterious explosion on the planet's surface engulfs Pioneer 1. The player, a government-approved mercenary known as a Hunter, is sent down to the surface by Pioneer 2 to piece together what happened.

Phantasy Star Online comes in four episodes. Episode I is concerned with the efforts of Pioneer 2 in discovering the truth behind the mysterious explosion. To do this, the player must follow in the footsteps of Red Ring Rico, a famous Pioneer 1 Hunter who is also looking for answers. It soon becomes apparent that Ragol is not as safe as Pioneer 2 was led to believe, and that the people of Pioneer 1 were involved in some very questionable activities in their "colonisation" of Ragol.

Episode II has the player work for the Lab, a scientific arm of the Pioneer 2 government. After passing some virtual-reality evaluation, the Lab tasks the player with investigating a secret laboratory that was recently discovered on Ragol's surface. This episode deals further with the dark activities of Pioneer 1, and involves a veteran Hunter called Heathcliff Flowen who fought alongside Rico.

Episode III is a Card Battle Game sequel exclusive to the Gamecube. Set 20 years after Episode II, it's about two rival groups- the government-approved Hunters and the rebellious Arkz faction- and their battle for control over the revolutionary C.A.R.D. (Compressed Alternate Reality Data) technology as humanity finally prepares Ragol for colonization.

Episode IV, featured in the PC-only version Blue Burst, is set in-between Episodes II and III. It concerns the efforts of the Hunters to discover the secrets behind a mysterious meteor which suddenly changed course in space to crash on the surface of Ragol.

All versions of Phantasy Star Online have had their online mode servers shut down. Sega had initially set up international servers for Blue Burst, but these were shut down on March 31st, 2008. The Japanese servers went down on December 27, 2010. You can play PSO on a private server, with several fan-created efforts out on the net to try in this regard.

See Phantasy Star for the original tetralogy. It was later followed by two Spiritual Successor series of its own, Phantasy Star Universe and Phantasy Star Online 2, both of which are inspired by Online but not directly related to it.

Has a character sheet under construction.