Power of the God Hand 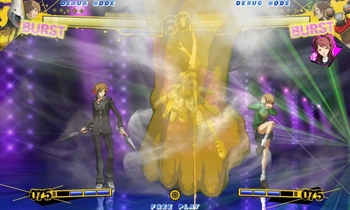 God Hand (or Godhand, or God's Hand) is a popular name for a person, item, or skill, almost exclusively in Japanese media and usually related to melee combat.

The appeal of the name is obvious. By comparing one's hands to those of a god, a fighter makes it seem like he can do impressive feats with them. For those who fight with their hands, obviously it's an appealing notion. Additionally, it evokes the idea of the "hand of God", while still being concise.

The reason this is primarily a Japanese-media trope is that the Japanese tend to use "god" in their names without considering it as blasphemous as western audiences do.

Compare Red Baron, which this often gets used as when it's a title. When it's a weapon, it's usually a Power Fist (see Stock Weapon Names).